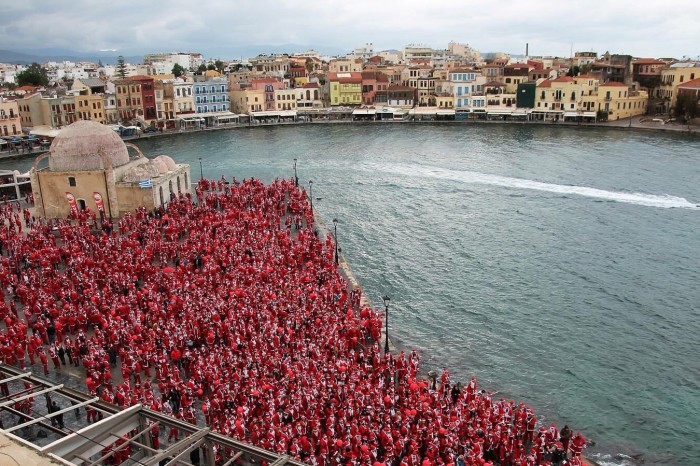 We Cretans choose to live each moment to the fullest; so with the Christmas holidays just around the corner we are once more, getting ready to celebrate with loads of fervour, gusto and zest.

Granted Crete’s former capital, second largest and arguably most picturesque city, Chania, a couple of kilometres from our Oscar Suites & Village at the seaside Agia Marina- Platanias, is not your typical “Rovaniemi-esque”, destination. Yet it does proffer an amazing, magical (and somewhat unconventional ) “Christmassy” experience. For new customs and old traditions seamlessly blend during Christmas in Chania. This is what makes a world of difference and we can not help but feel excited and super eager to join the festivities.

On the one hand we have all the staples found throughout the Western world: Impressive Christmas trees, gift laden shops and countless, twinkling lights, indeed creating a majestic, fairy tale-like scenery during Christmas in Chania. But on the other hand -honoring our considerable nautical legacy– we also have the beautifully adorned wooden model ships: This is in accordance to an age old Greek custom that remains alive in the islands and which symbolises a family’s gratitude to the deities for the safe return of the father and his sons from their voyages into the harsh Aegean sea.

Not-to-be-missed things to do during Christmas in Chania

So during Christmas in Chania, local and imported traditions are amalgamated, making this magical time even more special. Among the not-to-be-missed things to do throughout the festive season are:

As we are getting ready to savor the delights of Christmas in Chania, we would like to take a moment to wish every single of our guests and friends a very merry Christmas and a happy, enjoyable and fulfilling New Year. It was a pleasure to have you with us at Oscar Suites & Village and we are looking forward to welcoming you back again in the summer of 2019. Seeing you enjoying your holidays at our comfortable and stylish studios, apartments & suites; catching the sun rays in our pools, and savouring the gastronomic offerings of our Valentino pasta & grill restaurant, makes our efforts worthwhile and gives us inspiration to try even harder. In fact we have a host of exciting surprises in store for the coming season. Stay tuned!