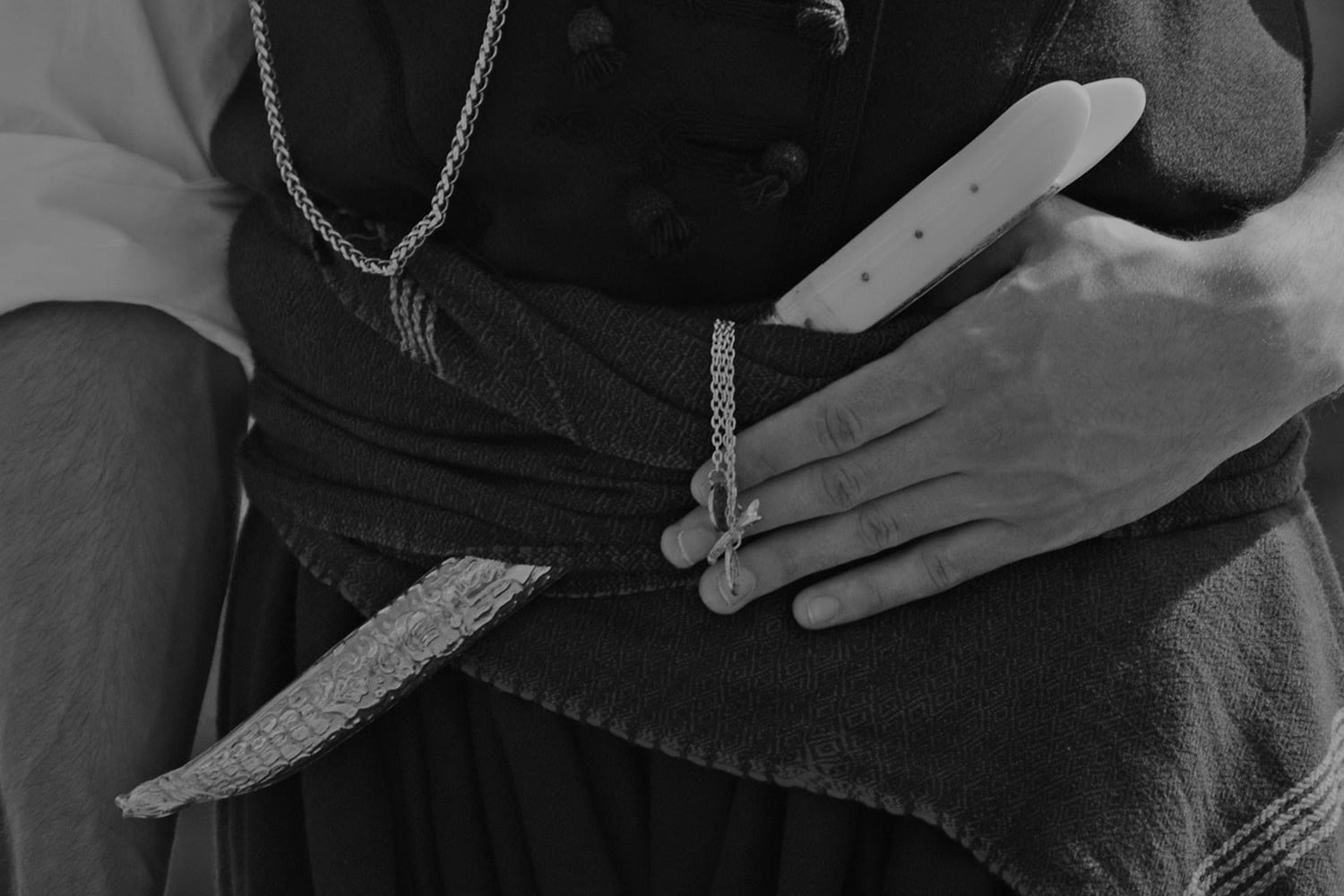 At the crossroads of East and West, Crete is steeped in fascinating customs and traditions. All of us at the Oscar Suites & Village, are certainly proud of the island we are lucky to call home. That’s why we love sharing its history, heritage and myths with you. Until it is time to welcome as many of you as possible in our family-style, studios, suite, and apartments in Chania, just steps from the sandy, blue flag awarded beach of Agia Marina-Platanias, read on to get a taste of the real Crete. Here’s all you need to know about one of its most powerful emblems: The Cretan dagger.

Slightly curved resembling a semi crescent; varying in size, from a very small, toy-like knife to an impressive half-meter or even longer saber. Invariably enclosed in intricate, gold and silver cases (foukari) -their bespoke patterns and plumes speaking volumes about their owners. With stainless steel blades often carved with mantinades, and ornate handles (manika), typically shaped like a bird’s beak or a V, and made of animal bone, horns or ivory.

An integral part of the Cretan costume, a powerful symbol of Cretan gallantry and the Cretan’s indomitable, rebellious spirit, a trusted companion in warfare and everyday life and perhaps the highest manifestation of Cretan arts & crafts: No single item represents the island of Crete and the psyche of its people, more than the traditional Cretan dagger.

Cretan arts & crafts: The history of the traditional Cretan dagger

Mankind’s need to possess some kind of blade dates back to the Stone Ages, as our civilization passed from the flight or fight to the fight and evolve stage. Crete is no exception. Legend has it that daggers resembling wild animals’ nails were invented by the Kourites: The mythological guardians of baby Zeus and first inhabitants of Crete. In the same vein, archaeological findings reveal that edged bronze and copper weapons were manufactured as early as Minoan Times. Ancient specimens of Cretan arts & crafts, these exquisite daggers were exported throughout Greece but also in other remote regions of Europe.

Metallurgy, weaponry and thereafter Cretan arts & crafts flourished in the Classical era, as Cretan warriors acquired widespread fame for their skill and equipment. In Roman times, the Romans themselves had a taste of the Cretan war machine in their attempts to conquer the island. In the middle ages, Crete fell prey to the Saracens who established their operational base there. Ferocious pirates that they were, they plagued the entire Mediterranean with raids using weapons that were manufactured on Crete. In the 13th-century the island passed on to the Venetians: They would remain here for the next 450 years thanks to their remarkable administrative and defensive systems. The latter was equipped by Cretan craftsmen. Oral tradition claims that their dagger manufacturing workshops in Herakleion were in fact situated at exactly the same spot where contemporary Cretan arts & crafts studios are found nowadays. Written sources moreover attest to the extensive use of daggers during the Psaromiligkos family revolt against the Venetians in the mid-14th century. Following Crete’s conquest by the Turks, the island’s metallurgists continued to fabricate various artisanal objects including highly ornate daggers. They would acquire even greater importance in the years to come, as Cretan revolutionaries repeatedly rebelled against Ottoman yoke throughout the 19th-century. The Cretan dagger continued to be an invaluable companion of every brave Cretan in their struggles over Macedonia, the Balkan Wars, the Asia Minor Campaign and the Second World War, even. A trusted ally in battle, invested with considerable sentimental value, the Cretan dagger became the quintessential symbol of Cretan valour and prowess.

But it was not only used for personal defence or in warfare. An intrinsic part of the local culture, the Cretan dagger boasted a number of different and diverse functions.

As part of the nuptial agreement, the groom would offer his bride-to-be a small silver dagger. It was to be worn by the girl on her waist, just like the men, in all celebrations and feasts. This indicated that she belonged to her husband and no one else and that the price of infidelity would be her life itself. Practically also it gave the woman the means to defend herself when in danger.

Daggers were incorporated in the wedding rituals too. According to custom, the future wife had to place a small black – hilted dagger on her shoe before and during the ceremony to deter ill-wishers. Then the newlyweds had to etch a cross on the threshold of their house with the same knife to drive evil spirits away.

The dagger was indeed imbued with great metaphysical prowess in Crete. Tiny black – hilted daggers were used in manufacturing talismans for children and epileptics, but also by sorcerers in rituals and spells. Purportedly dreaded by demons, black – hilted daggers were employed to trace a circle around the magus. This would grant them protection from malicious spirits allowing them to perform their magic unencumbered by any type of fiends.

What’s more, lyra-virtuosos allegedly learned to play their instruments with great skill inside such magic circles. Cutting a long story short, this is how they succeeded in tricking the fairies (which contrary to popular belief were not at all kind or sympathetic) into teaching them how to play the lyra with dexterity and flair!

We sincerely hope that you’ll soon have the opportunity to enjoy these exquisite lyra players -or browse for ornate Cretan daggers– in person. Until then stay tuned for more enchanting tales and anecdotes about magnificent Crete.