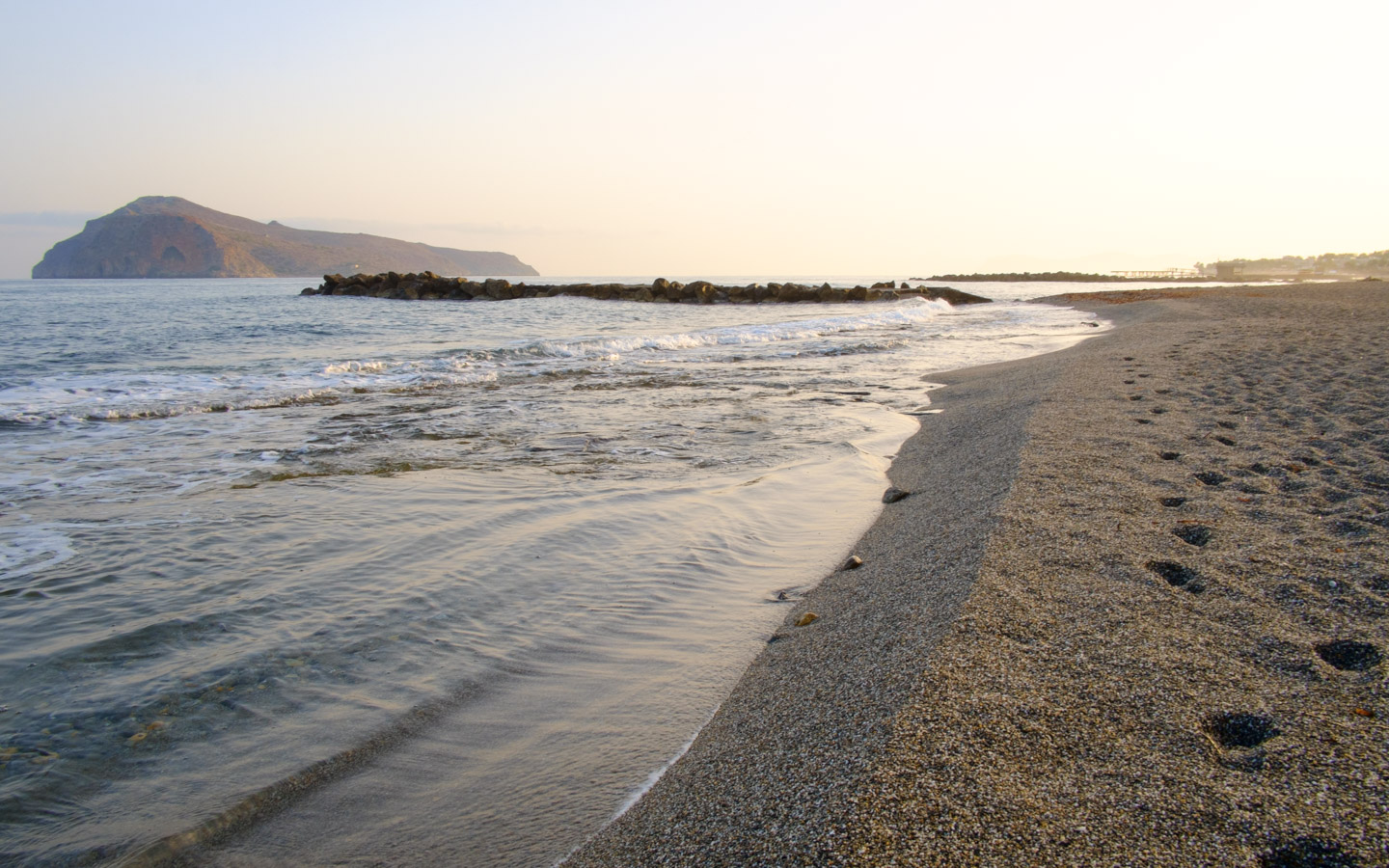 Go once, get forever hooked

Places to visit in Crete when staying at Oscar

With more than 300 days of sunshine in a year; a wealth of exotic beaches, but also awe-inspiring mountains, gorges, and ravines; untouched villages and quaint towns; Unesco monuments and historical sites; world-famous food and drink and that’s not to mention hospitable, welcoming and distinctly zestful locals; Crete has something for all. Whether you’re chasing the sun, are a history buff, a nature lover or just a foodie, you’ll find, not one, but myriads of reasons for which to fall in love with Greece’s largest island.

On the west coast of Crete, Oscar Suites & Village hotel in Agia Marina Platanias is the ideal starting point for all sorts of escapades: whether day tours to nearby, natural or man-made, must-see or hidden gem kind of attractions; or round trips around the island. Book your vehicle and get ready to explore. Here are some of the top places to visit in Crete. Do bear in mind however that the list is merely indicative and just to whet your appetite for discovery and exploration:

Mythology claims that it was Zeus’ mighty thunderbolt that split the earth to create “Europe’s Grand Canyon”. In the White Mountains of West Crete, carved out of a limestone plateau, the river gorge of Samaria, at 16 km length, is the longest in the continent and a part of the UNESCO World Network of Biosphere Reserves. Starting at a height of 1,230 meters and descending all the way to the Libyan Sea, Samaria is rightfully one of the most popular places to visit in Crete. The 5-7 hours epic hike will take you through a dramatically beautiful scenery of luscious flora and fauna, Byzantine temples, Christian chapels, Venetian fortresses, World War II shelters, and village remnants. At the end of the trail, you’ll reach the shores of Agia Roumeli, thankful for its cool, clear waters and tavernas!

With fine, pale pink sands and blue-green waters, Falasarna has earned a fixed place in the “best beaches of the world” lists. The most popular -and crowded -spot is Pachia Ammos, with an array of beach bars and water sports facilities. For more privacy and seclusion head towards the north; or if you are the explorer type go south to discover an amazing sea bed.

A Natura 2000 protected area, lagoon-like Elafonisi boasts a remarkable, one of a kind scenery with characteristically turquoise waters and surreal purple-pink sands. A not to be missed sight, in fact, one of the most renowned beaches in the Mediterranean, it tends to get overcrowded. If you have the choice it is best to visit in the offseason.

No wonder a hippy paradise back in the 70’s Paleohora on the south, about 70 km from Chania, combines a striking natural scenery with a wealth of touristic amenities. Swim in the Libyan sea looking at the White Mountains, walk along the romantic lamp promenade to the east or visit the tamarisk-lined Oriental Bay Beach. Eat traditional and international delicacies in its many restaurants and tavernas; but also party till the early hours in its bars.

Rugged, unique and markedly less touristic, the Sfakia region combining the imposing White Mountains on the north, with superb beaches on the south, is one of the most authentic places to visit in Crete. Venture off the beaten path to discover time-honored customs and traditions, take in the striking, unchanged for centuries natural scenery, indulge in traditional delicacies and spirits and get acquainted with proud, fierce locals. Sfakians are said to be as tough as their arduous terrain. It is no coincidence after all, that they were historically intolerant of any attempts to be conquered, whilst in WWII they played a pivotal part in the Greek resistance.

80 km southeast of Chania in the shadow of the White Mountains, you’ll find Frangokastelo: A very well preserved Venetian castle which is world-famous for its… ghosts: They are named Drosoulites, and appear at dawn each May. Legend has it that they are shadows of warriors who died there in a ferocious battle during the war of independence, but actually “they” are just a meteorological phenomenon.

In front of the castle there is an extensive, sheltered and gently shelving sandy beach with shallow turquoise waters, ideal for children. West of the main beach you will find Vatalos, which is sandy in parts and pebbly with rocks in others, making it ideal for snorkeling. On the East there is Orthi Ammos, sporting large sand dunes. There are several restaurants, cafes, and shops in the area, but thanks to its relative remoteness, massive development has been avoided.

Take a look at how Cretans live their everyday lives in the quiet, unspoiled town of Kissamos, 40 km west of Chania. A long beach stretches east of the town.

One of the most iconic beaches northwest of Chania, Crete; Balos boasts an exotic, majestic setting, with white sand and rocky formations, you won’t find elsewhere. Bear in mind that it gets crowded; so it is best to visit early in the morning. A good idea is to reach it by boat from Kissamos port and therefore also get to see Gramvousa with its Venetian castle.

Milia is a small old village surrounded by chestnut trees, birds and butterflies and a brook running through the main road. Houses are few and the prevailing sounds are those of the wind and the sheep bells. Milia looks exactly like it did 200 years ago and this is what lends it an unsurpassed charm. Accessible via a 2,5 km dirt road, the route, in the midst of mountain peaks, it is simply unforgettable.

Take a trip back in time in the old town of Rethymno, in the heart of the modern town, 60 km from Chania. A well preserved Renaissance port, established during the Venetian occupation in 1204, Rethymno serves as a mid-stop between Chania and Heraklion.

One of the oldest cultures of the Bronze Age culture and the first maritime power in the Mediterranean, the Minoans were named after their legendary King Minos. 5km outside of Heraklion, Knossos, a monumental residential complex, is believed to have been his palace. Despite its largely speculative, somewhat controversial restoration by Sir Arthur Evans and artists Piet de Jong and Emile Gilliéron in the first decades of the 20th century, Knossos with its impressive central courtyard, is undoubtedly one of the most spectacular places to visit in Crete. Similarly, adjacent Phaistos boasts the most beautiful setting of any of the Minoan Palaces, with Messara plain to its east and Ida mountain to its north. Phaistos also is significantly more quiet than its more famous counterpart, Knossos, and everything may be seen from up close.

Combine this trip with a visit to the magnificent Heraklion Archaeological Museum to admire the world-famous frescoes of proud and slender young men and women in vivid shades of terracotta, yellow, and blue, as well as the cult figurines, jewelry, and pottery collected from various Minoan sites.

Explore the Mediterranean sea world at the Aquaworld Aquarium in Hersonissos, 14 km from Heraklion. Live exhibits of local sea life and reptiles are amongst the attractions, fascinating young and old alike.

At the far eastern corner of the island of Crete, Vai is the largest natural palm forest in Europe, with a large sandy beach at its foot. The sight is spectacular, well worth making the trip, especially in the offseason.

Surrounded by high mountains and olive groves, Lake Kourna is one of the most stunning places to visit in Crete. Actually, the only natural freshwater lake on the island, Kourna constitutes an important ecosystem for Greece and is thereby protected under the Natura 2000 program. Home to moorhens and ducks, eels, snakes, a rare two-color turtle as well as herons and cormorants, Lake Kourna offers a breathtaking setting. Just sit back and relax, take a stroll, a bicycle tour or even swim in its clear waters. Another fun option is to rent a pedalo and go on a ride on the lake; whilst you may quench your hunger and thirst at the various onsite tavernas. On your way back, it is worth taking a detour to the homonymous village just 4 km south of the lake. Situated at an altitude of 200 meters on the foot of Mount Dafnomadara, it is blissfully unspoiled and untouched by mass tourism, allowing you to get a glimpse of times gone by.

Neuralgic centers of resistance and protected shelters during the troubled times of the Ottoman rule and World War II, Crete’s medieval monasteries are among the top places to visit in Crete, for both historical and aesthetic reasons.

10 Km east of Sitia, Toplou is a 14th- century fortified monastery, which dazzles with its architecture and setting. Among its treasures is an intricate 18th-century icon with scenes from an Orthodox prayer.

An originally Byzantine monastery, Arkadiou, 23km southeast of Réthymno, played a fundamental role in the 1866 Cretan rebellion, as nearly a thousand revolutionaries, civilians and monks barricaded within its walls to protect themselves against the Turks. Though there was a massive explosion (ordered by the Abbott who recognized that the position of the besieged was hopeless), most of the monastery survived and was for years featured on the (now obsolete) 100 drachma banknote.

On the south coast, 40 km from Rethymnon, you’ ll find the famous monastery of Preveli, overlooking the Libyan Sea. It consists of two building complexes, with a distance of 1,7 kilometers between them. Nowadays deserted, Kato Monastiri is dedicated to St. John the Baptist, while Piso Manastiri, to St. John the Divine. During the heroic battle of Crete in 1941, the Monastery of Preveli provided shelter to a large number of English, New Zealand and Australian soldiers from the Allied troops. Commemorating the 60th anniversary of the Battle of Crete, the monastery has erected an international memorial dedicated to peace and remembrance, against a stunning, panoramic view.

BOOK YOUR STAY
book online and get the best price guaranteed